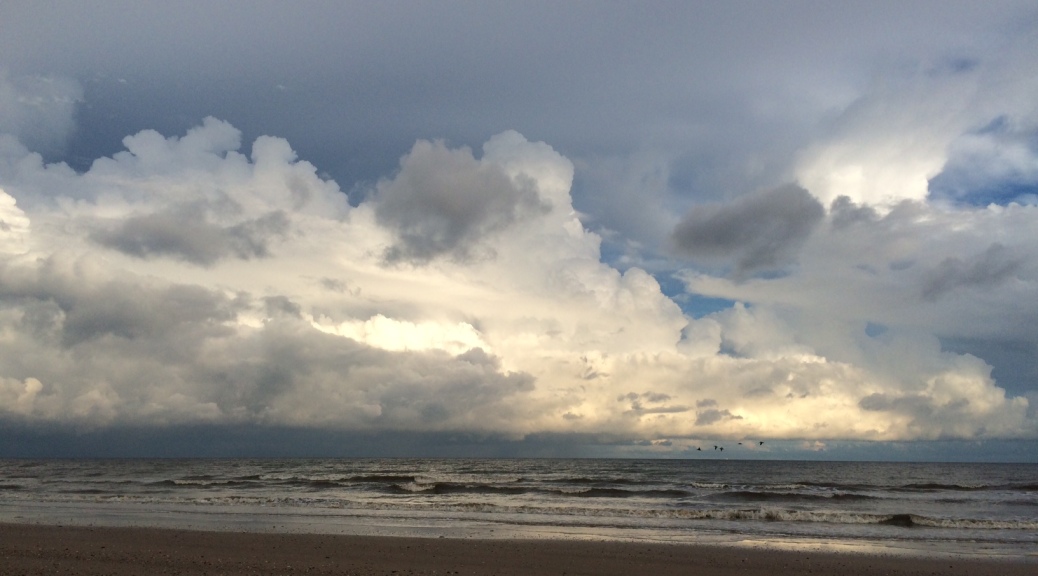 Previously, I wrote about an amazing trip Hubby and I had to McFaddin Beach, fossil hunting. We had a great time, and we knew we couldn’t wait long before we were wanting to go again. It’s pretty rare that we have a weekend coming up that doesn’t already have plans, but last weekend just such an occasion arose, so we decided to head back to McFaddin to do some serious fossil hunting.

So let me back up: I have had one of the busiest months ever at my company. For those of you that don’t know, I’m in the Zombie and Poltergeist Prevention business. And baby, business is boomin’. We were already pretty busy, when all of a sudden Louisiana was under MUCH more water than it normally is. So, because of my job saving the planet from Zombie invasions, I have been doing A LOT of work in Louisiana, and I didn’t get home until 11 pm on Friday. Saturday morning we slept in, and finally decided to head to McFaddin Beach for the weekend. I wanted to be able to relax and not have to think about anything for about 48 hours. What better way to do that, then at the beach?

So we loaded up and got to the beach around noon. Immediately we got out and started birding, because we are working on our 2016 Bird List and it’s the beginning of Fall Migration and you can find some really interesting species this time of year. The mosquitoes were pretty bad if you walked in the grass, so we covered ourselves with bug spray and kept on with birding and then moved on the fossil hunting. I didn’t find anything spectacular, so I decided to read for a little while and take a nap on the beach. Perfect day for relaxing! I helped Hubby get the canopy set up, and then I went back to fossil hunting while he started to make dinner. 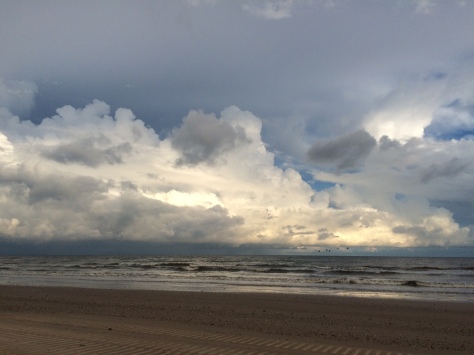 I noticed a storm starting to build, and I kept an eye on it, thinking it was going to go around us. After all, we had checked the weather forecast for the area, and there wasn’t anything worrisome there, which is why we had headed down to the beach to begin with. As we sat down for dinner, we watched the storm roll in. The majority of the storm went south of us, and there was even a teeny-tiny water spout! Which was pretty cool since I had never seen one before and it was small, so we weren’t worried. We did get some rain after all, so we moved the generator under the canopy to keep it as dry as possible. 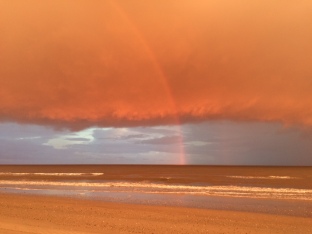 Rainbow after the storm

Sunset on the storm

Our home away from home

Sunset making the rain pink in the distance

As soon as it stopped raining however, is when all hell broke loose. The mosquitoes came out in droves. We rinsed off as fast as we could and then ran to the camper. We were covered in mosquito bites, so we both took some Benadryl and I passed out. Hubby, on the other hand, couldn’t sleep. He was too concerned about the storm surge. It was still raining, and the water was getting higher. It’s a pretty small beach to begin with, so there wasn’t a lot of “wiggle room.” Finally, at around 12:30 am, Hubby opened the door to look outside. In a Benadryl fog, I wasn’t sure why he was doing that, except that he was letting in more mosquitoes.

He said he was concerned about the storm surge, and as soon as I looked outside, a wave came up the beach, and went UNDER THE CAMPER. We knew if we stayed there, we would be lucky to dig the truck and trailer out of the sand in the morning. Not to mention the  amount of money we would have lost with the generator, canopy, chairs, table, and cooking equipment that we had set up that would have been washed into the ocean. So we ran outside as fast as possible to move our stuff to higher ground. Hubby pulled the truck and trailer around into the grassy area while I ran interference for any debris that was in the way (there is a lot of garbage on that beach, unfortunately). I was getting devoured by mosquitoes, but I didn’t have time to think about it – we had to get our stuff to higher ground. Once the truck and trailer were at high ground, we moved the generator, all the cooking stuff and table and camp chairs, and then we had to get the tie-down weights untied from the canopy so we could move it without bending it, and then we had to re-tie them so the canopy would be over the generator, and not fly away. At this point I couldn’t handle the bug bites anymore. If I stood still it felt like I was getting attacked by needles all over my body. While I was running around moving our gear, I had to keep my mouth closed to keep from swallowing them.

Once we made sure that everything was moved to high ground, and Hubby put a car tail light at the water line (I told you were was a lot of debris on this beach) in order to see if the water was getting higher or not (if the tail light moved or was gone, the water was getting higher), we went back to the camper. Again, standing still, waiting to make sure that everything was okay, we were getting mauled. I looked at the camper and it was covered in clouds of mosquitoes. I swiped them away from the door as best I could before jumping into the camper. I cleaned the sand off my feet as best I could, and then began to SCRATCH. I hadn’t been this itchy in my entire life. It was like I had Chicken Pox on steroids. I was almost in tears, I was so itchy. Hubby jumped in the camper, and repeated my process. Smashing every mosquito we could find inside the trailer, I was crazy with the need to make sure they were all dead. I couldn’t handle getting ANOTHER mosquito bite.

When we finally began to win the battle again the mosquitoes inside the camper, I began to see what looked like evidence for a murder that happened inside the camper. The mosquitoes we had been smashing were full of blood, so there were blood smears all over the doors and walls of the camper. It was hilarious and horrific at the same time (probably only hilarious because of the delirium caused by low red blood cells).

We finally were able to settle down, and we watched the water to see that it wasn’t coming up any further. However, we confirmed that if we had stayed there, there would have been serious problems. It was not about 1 am. We took another Benadryl each and passed out, making sure the turn off the alarm we had set to get up early and take sunrise shots. Eff that, after the night we had.

The next morning we got up and it was still raining. Exhausted, itchy, mentally drained, and disappointed, we left the beach without doing any more fossil hunting. I was sad, but I just didn’t have the energy needed to put into fighting mosquitoes for another day. And the sad thing is, I know that storm pushed some amazing fossils to the beach. I just couldn’t muster the strength.

In closing, we will be going back. Just not camping there on the beach. There is a State Park nearby, called Sea Rim State Park, where we will be camping. The storm surge is much less of a concern (because you are MUCH further away from the beach) and the mosquitoes are on the tolerable level, rather than the insanity-inducing level.

But I have decided that McFaddin Beach is a special hell.

(One should never pass up the opportunity for a Firefly reference – Ron Glass as Shepherd Book, image found on http://theretiredbridgeburner.blogspot.com/2013/05/hanlons-razor.html, source unknown)

I am a 20something that loves to be outdoors with my husband, and have always led a pretty outdoorsy life. I have a Masters in Biology. Conservation is my passion thanks to being raised in a nature-loving household. Now, Hubby and I are always outdoors or under water, doing what we love. These are my adventures from the distant, and not-so-distant past, as well as a few gems of wisdom mixed in for your viewing pleasure.

Arts and crafts, cooking, saving money, and my weird life.

Deep in the Heart of Textiles

Sharing a range of textiles

Essays, photos, and discussion about prairie ecology, restoration, and management

i was hungry and now I'm not

Hearing With The Eye

Books, Music and Travel - The three pillars of my life...

Beautiful photos of hiking and other outdoor adventures.

These are my silly travel stories where I use humor and sarcasm to explain other cultures and world events. I use this forum to be a voice for the Little Guy. Little Guys have tiny, squeaky voices and no one wants to hear them anyway.

An Aussie in Boston learns to run. And tries not to fall down.